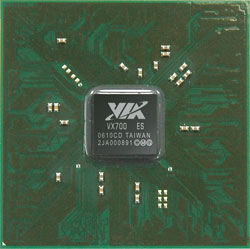 Part of what turned people off from the Samsung Q1 and other UMPCs based on the Microsoft Origami Project was their hefty price tag. Many have noted that the Intel innards (particularly, the processor) is largely to blame for the extra expense, and that is why chip maker VIA has stepped into the forefront to provide a more budget-minded processor for future ultramobile PCs. The good people at VIA have finally gotten around to announcing a new chipset designed for UMPCs, and they’re simply christening it the VX700.

With this new chipset, not only will you save a few bucks (okay, potentially a lot of bucks), but it appears that you’ll get some extra juice out of the battery as well, because this new chipset is said to be 40% smaller. As far as support goes, the VIA VX700 chipset will likely show love for up to 4 gigs of DDR2 memory, two SATA 150 or SATA II devices, six USB 2.0 ports, four PCI slots, and one EIDE channel.

The plan is to go into mass production sometime this quarter, with UMPC implementation following at some point in the undisclosed future.