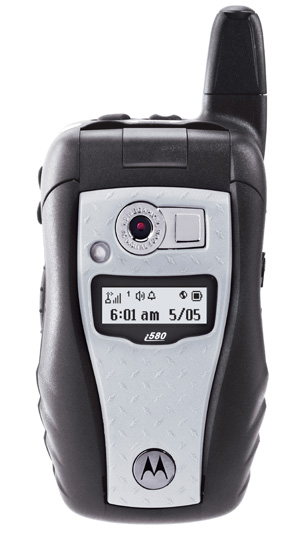 While the bigger focus on Motorola is usually toward its slim line of phones — be it the RAZR, SLVR, or even the Q — we shouldn’t forget about the walkie-talkie oriented segment that they developed with iDEN. That technology is far from dead, because Sprint Nextel has just announced that they will be adding the Motorola i580 rugged phone to their lineup.

Key features to this “takes a licking and keeps on ticking” handset include a clamshell form factor, Bluetooth wireless technology, an integrated 1.3 megapixel camera with video recording capabilities, microSD expansion, and GPS support, in addition to the more obvious stuff like walkie-talkie and the “miltary-level” ability to withstand rain, dust, shock, and vibration. It’s rugged, after all.

The Motorola i580 is available now through Sprint and Nextel stores, with an asking price of $280 after the usual battery of discounts, rebates, and promotions.