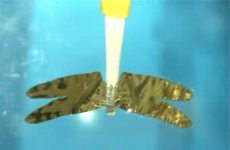 Can paper move a robot? Researchers in South Korea think so, and they are out to prove it.

A team at Inha University has discovered that electricity can make cellulose bend. Cellulose, of course, is the main ingredient in paper. A set of recent experiments has resulted in treated cellulose that is lightweight and inexpensive, and needs little power. The Inha team is now working with the American space agency NASA on a project to develop small robots that have flapping paper wings.

Such an invention could have wide-ranging uses for the space agency and also for more terrestrial agencies such as emergency response providers. Such a vehicle, which would be wireless and able to flap its wings just like a real insect, could fly itself into areas hazardous to humans, providing surveillance images and doing tests for harmful gases or chemicals. The “insects” could also be used to survey the surface of Mars, Venus, and other planets from the air. Whether the hovering altitude is a few meters or a few miles off the ground, such surveillance techniques would make data gathering a far sight faster than the current land-based rovers can provide.

The techniques involved in creating such “insects” involved dissolving paper pulp into sheets and then coating with a layer of gold to act as an electrode. The ions moving through the paper make it bend when an electrical current is added.

Laboratory tests are all well and good, but how would such a thing perform in the real world or on another world? We’ll have to wait and see. More tests are needed, of course. The scientists, however, believe that they will provide a solution soon. In the meantime, think of dragonflies on Mars.