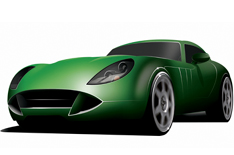 While a good lot of people turn to Italy for a sweetly designed, fast-paced sports car, it has been proven that several other automakers are just as capable as a Ferrari or Lamborghini to produce a super car. We’ve seen an offering from down under, but this time around, we turn to the United Kingdom to find the GTC Coupe from Marcos. The lightweight, high-powered sports car is set to be unveiled in London next week, not waiting for the British Motor Show later this month.

The design cues may elicit some reference to TVR, another British automaker, but that could be little more than a coincidence. Under the hood you’ll find a 6L V8 pulled out of the Chevy Corvette, with the “tubular subframe” being borrowed from the crew at Prodrive. At a feather-light 2500 pounds, this car only takes 4.2 seconds to blast up to 60mph, with the 0-100-0 run taking 13.2 seconds.

As with most sporty British motorcars, the Marcos GTC coupe is a fairly limited production model, with plans of building between 50 and 100 units.