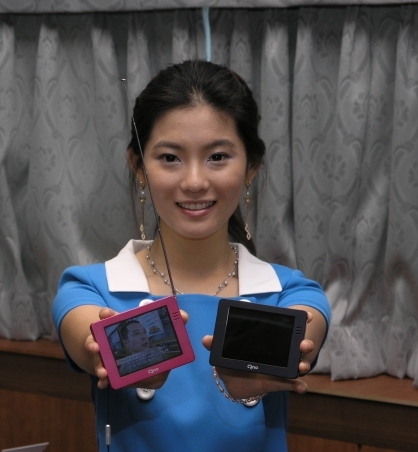 We’re still stuck trying to play catch up on the mobile television front, the people of Korea are getting bombarded with new DMB products on a daily basis. If you don’t feel like squinting to watch mobile television on an appropriately equipped cell phone, Qrio has the QT-9 to satisfy your Korean drama-watching needs, thanks to the new QT-9 and its 3.5-inch screen. That’s more than a full-inch bigger than the similarly featured B10 from iRiver, which by comparison, has “only” a 2.2-inch display.

It unfortunately has to rock the retractable silver antenna in order to pick up any sort of signal, but the actual Qrio QT-9 Pocket DMB TV is supermodel chic at a mere 9.8mm thick. They’ve got iRiver beat on this front as well (the B10 is 17.1mm). Too bad there doesn’t appear to be any PMP functionality or on-board memory on this tiny cutesy of a beast.

No word on pricing, but look for the QT-9 to hit Korean shelves in either black or pink flavours.