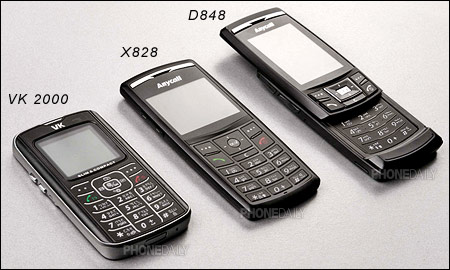 Samsung is releasing yet another couple of slim phones upon the marketplace, this time unveiling them at the ITU Telecom Asia 2006 show. Both the X828 and D848 take on Samsung’s signature black exterior, as well as the usual onslaught of multimedia functionality.

The X828 is an incredibly thin candybar at a mere 6.9mm, placing it in the same league as the similarly styled offering from VK Mobile (2000) and the SLVR we all know and love from Motorola. In addition to the 2 megapixel camera found on board with the ability to record video at 352 x 288, the X828 also packs a 1.9-inch TFT display, 80MB RAM, and TV-out, in addition to being able to read Word, Excel, PDF, and other documents. Too bad there’s no expansion slot to be found.

The D848 is yet another skinny slider from the Korean cell phone maker. At 11.95mm thick, it may seem anorexic but it’s chocked full of features, including a 2MP camera, MP3/AAC/AAC+ music player, A2DP Bluetooth capabilities, stereo speakers, and a good sized 2.12-inch QVGA display.