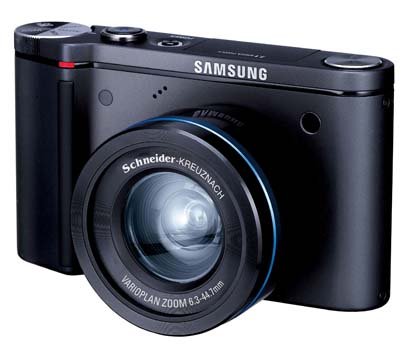 Not satisfied with having the world’s slimmest cell phones, Samsung is set to take their “thin is in” mentality into the digital camera forum with the new “NV” line of fashionable picture takers. Like their cell phone counterparts, these digicams are quite slim (all less than an inch thick) and sport s a sleek black exterior. The debut includes three units — the NV3, NV7 (pictured), and NV10 – all of which come with 2.5-inch LCD displays.

The NV3 is the most “pocketable” at a mere 0.7-inches in thickness. It packs a 7 megapixel CCD, 3x zoom, and a few PMP functions for good measure. Bump yourself up to the NV7 and you’ll pack a whooping 7x optical zoom, in addition to some great optical image stabilisation. The “touch pad” row of buttons along the LCD make for easy menu access. For sheer megapixel supremacy, you’ll have to turn to the NV10, which, as its name implies, throws ten megapixel pictures into the mix, in addition to Advanced Shake Reduction and 5x optical zoom.