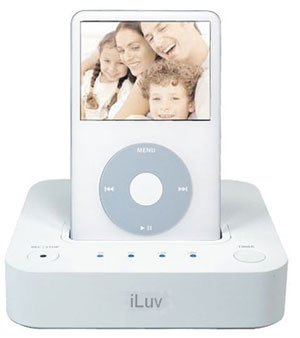 I’m going to refrain from breaking out into the Barney song as much as the iLuv immediately reminds me of those lyrics (I hate that purple dinosaur). IMJ is getting ready to release the iLuv-i180, a dock for the 5th-gen iPod Video that allows television programs and other content to be directly recorded onto the glossy white player for later viewing.

The video input can come from any number of sources, including your TV and your computer’s hard drive. Simply dock the iPod, start up the movie, click record and leave her be as she doctors up some MPEG-4s (320×240) for your Apple. A nifty feature is that you can pre-set the length of the recording (30, 60, 120, or 180 minutes), allowing you to go prepare dinner or whatever without having to worry about clicking “stop.”

Available in either black or white (to correspond with your flavor of iPod Video), the iLuv-i180 is expected to drop in Japan early next month with an asking price of 19,800 Yen (about $172 American).