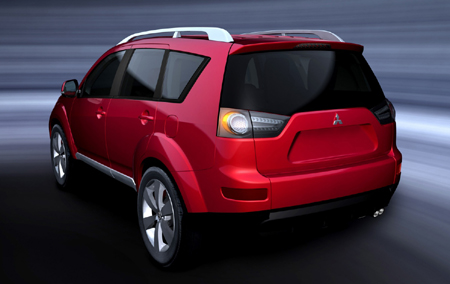 As much as they like the sexy sound of calling it a concept vehicle, the Mitsubishi Outlander has not only launched in Japan, but has become the best-selling compact SUV in the land of the rising sun. A version of the sport ute is destined for the United States later this year, but the people of Europe will get a special edition all their own.

The Euro-spec Outlander is set to make its debut in September at the Paris Motor Show, and it’s got a couple bells and whistles to set it apart from the renditions heading to Japan or the States.

For starters, they’re tossing in a 2.0L turbodiesel engine capable of 138hp, courtesy of Volkswagen. The Mount-Fuji grille is a Europe exclusive, as are the huge 20-inch wheels and spiffy Metallic Red paint job. The silver accents on the roof rails, side body strips, door handles, front skid plate and grille surround dress it up quite nicely. From a fold-away third row of seating to the split tailgate, the Euro-spec Mitsu Outlander has you covered whether you’re hauling gear or extra people.