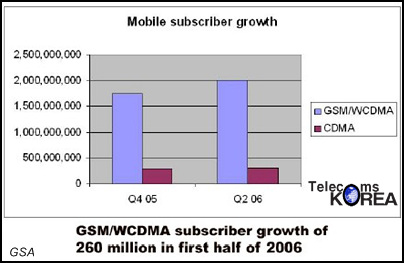 Most of the world is working on GSM-based technologies these days when it comes to cell phone use (81% GSM market share), with the notable exceptions of North America (where there is a fairly significant CDMA following via Verizon, Telus, etc.) and Korea (where only CDMA is offered). It seems that the trend toward GSM domination is continuing, because according to a recent survey conducted by the Global mobile Suppliers Assocation, numerous CDMA service providers are jumping onto the GSM bandwagon.

While some are considering a “dual system strategy”, it seems that the majority are seriously considering abandoning CDMA altogether and going with GSM only. In fact, according to this report, 25 current CDMA providers are going to deploy GSM or WCDMA (WCDMA is based on GSM; confusing, I know) “either as an overlay, or as a replacement of the existing CDMA systems.”

They did not see any indication of the opposite trend, as no GSM providers are noted for wanting to swtich to CDMA. Current TDMA operators are also slowly moving toward GSM technologies.