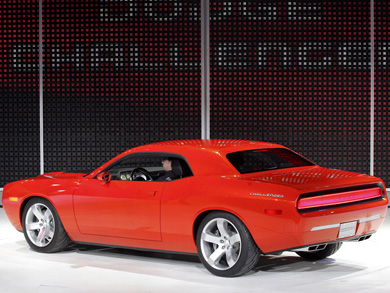 We saw the concept. We loved the concept. We begged for it to be made… and they heard our cries. The good people over at the Chrysler Group have gone on the record confirming that the Dodge Challenger concept will become a reality, heading into production as a 2008 model.

According to Tom LaSorda, President and CEO of the Chrysler Group, the company hasn’t “seen this kind of spontaneous, passionate response to a car since we unveiled the Dodge Viper concept in 1989.” The rest, of course, is history.

The retro styling coupled with a powerful engine has huge appeal these days. Cars like this and the souped-up versions of the Ford Mustang, among others, prove that American muscle is alive and well. Especially considering that many baby boomers have a little extra coin to spend these days on “mid-life crisis cars” — no offence to any readers who fall into that segment — I can only anticipate that Chrysler/Dodge will do well with the Challenger.

Want something “bold, powerful and capable”? Your patience will pay off in 2008 when the Challenger hits showrooms.