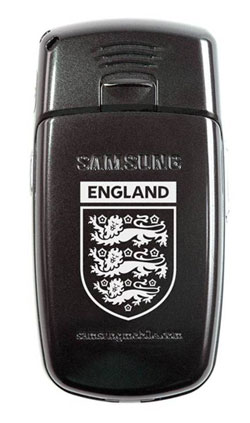 World Cup fever has hit just about every neighbourhood, every city, and every country right around the world these past couple of weeks. The quarterfinals began today, and it seems that Samsung has thrown in their lot with Beckham’s crew (seeing how their home Korea has been knocked out of the tournament already). The electronics manufacturer has just announced that they will be releasing an England-branded cell phone for T-Mobile, just a day before the popular squad is set to take on Portugal in the next round of play.

I’m wondering if this is a little conflict of interest, though, given that Samsung is an official World Cup sponsor. It would only seem fair if they were to release special edition phones for the other 31 countries involved in this year’s tourney, but hey, who’s got time for that? It’s England or nothin!

Of course, this is little more than a cash grab anyways, because this “special phone” simply sports an England coat of arms on the battery cover and not much else. Just grab a sticker, slap it on your battery cover and call it a day.