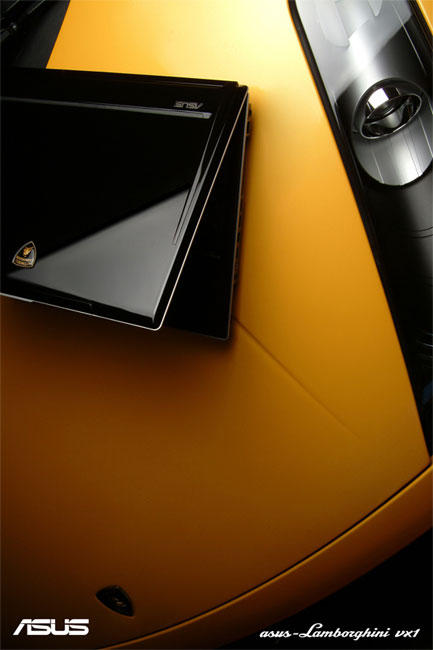 While most car enthusiasts dream of the day that they can cruise along a mountain pass behind the wheel of a beefy Gallardo or drool-worthy Murcielago, such dreams are just that: dreams. You may not ever be able to own a Lamborghini, but you can get a piece of the pie by opting for the special Lamborghini edition VX1 notebook computer from the good people at Asus. Sure, it’s not the same as having a herd of horses under the hood, but you do get the sleek design you know and love, complete with the possibility of getting it clad in Lamborghini yellow.

The actual specs themselves aren’t anything to scoff at either, Asus hasn’t changed much since we first heard about the VX1 back in April. It isn’t the most powerful beast in the laptop market, but neither is a Gallardo. Under the hood of this computing machine, you’ll find an Intel Core Duo T2500 processor, backed by an Intel 945PM chipset, 2 gigs of DDR2 667MHz RAM, and graphics by way of a NVIDIA GeForce Go 7400 VX card. The 160GB hard drive gives plenty of space as it redlines at 5400rpm. Other notables include a 15″ SXGA+ display, DVD burner, and, of course, a Lamborghini logo.

Breaking the $4000 US mark, the Lamborghini edition VX1 should start selling on July 7th… in Korea.