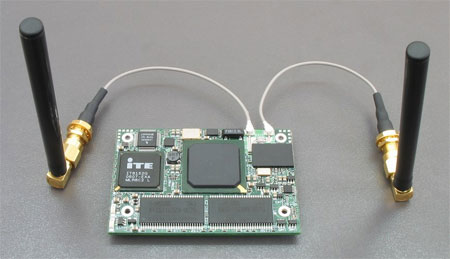 This little computer may just be the size of a credit card, but you can’t call it anything less than a PC. Unlike a Pocket PC, PDA or anything else this small, the CM-X270 has a PCI Bus, 4 USB host ports and wired networking.

One look at it tells you it isn’t a consumer product (could it be the lack of a display interface?). It’s designed for companies to integrate into all sorts of other devices. They can buy them for as little as $57 each at 1,000 quantities. If you want one badly enough, all you have to do is find 999 friends who want one, too.