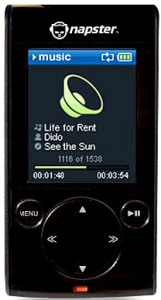 Remember when Napster was the bane of the music industry, when it was still being used by shady individuals to distribute unauthorized copies of new albums and whatnot? My, how that has changed. Napster is now a legitimate music download service that “charges” their customers to get new songs, but not only that, the company is gearing up to enter the DAP market a la Apple.

The Napster MP3 player has 1 gigabyte of flash based memory, and has support for the MP3, WMA, WAV, MPEG4 (video), and JPEG (photo) formats. The design was clearly influenced by that coming out of the Jobs camp, with a prominent round (but not click wheel) navigational control just below the color (?) screen. Other key features include an integrated FM tuner, a rechargeable li-polymer battery capable of 35 hours of play, and your standard issue equalizer settings.

While the retail price on this puppy is officially set at $120, Napster has a special deal going on right now that allows you to get their new MP3 player for mere fifty smackaroos if you sign up for the $15/month “Napster To Go” subscription service for one year. Starting to sound like the cell phone market, huh?