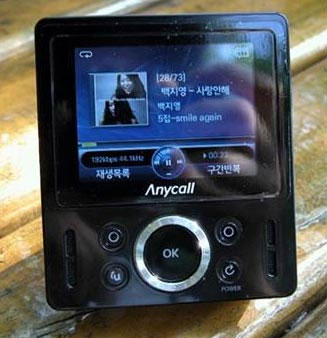 Don’t let the AnyCall moniker fool you: this ain’t no cell phone. In a strange turn, Samsung is unveiling a new device and they’re not quick to point out that it’s the world’s thinnest this or the world’s first that. Instead, the Samsung SMU-D110 is simply your standard issue Korean portable media player, meaning that it rocks the DMB.

With a rather square form factor, this latest device from the electronics giant isn’t the most exciting thing to look at, though I am digging wide-aspect display. With a large round “OK” button in the centre and a large-ish display above, it immediately conjures up images of an iPod Video, but don’t let anyone at Samsung hear you saying that.

Not much else is known about this little multimedia wonder at this time, though the release date appears to be imminent. Not that you care, because it doesn’t look like it’s leaving Korea anyhow.