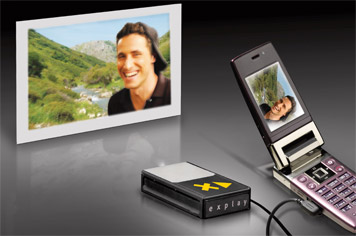 We’ve seen some small projectors in the last while, but Explay takes it to a whole different level. The new projector is just about the size of a matchbox.

It can be connected right to your phone to make it much easier to bore even more people with your pictures and videos. The projector is apparently in testing right now, and everything seems to be going well. Though the device will likely appear on the market itself, Explay has more ambitious plans. They plan to use the engine of the nano projector in a range of accessories for all sorts of devices from PVRs to camcorders. They aim to hit the market by early in 2007. It’s a simple way to move beyond the small screen on your portable devices and enjoy views that are much easier on your eyes ranging between 7 and 35 inches. They’ll be in a race aginst the phones and other devices that are due to have built in projectors, but the nano projectors will open up all sorts of new possibilities.