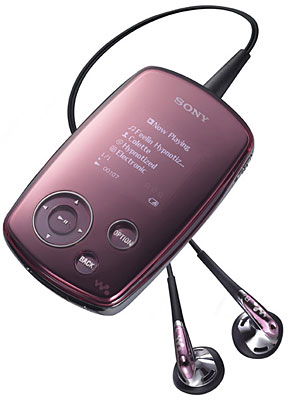 The battle between Apple and Sony for portable music players and propriety formats continues (Okay, so it’s still a one-sided fight, but who’s keeping count?). The nifty display that we’ve grown to know and love from Sony’s A-series MP3 players is coming back, and coming back with more storage. If the top-end 6GB version wasn’t enough for you, Sony is now unleashing the 8GB NW-A1200 on the US market.

The features remain much the same as its predecessors (like the NW-A1000). You’ll still get to deal with the usual fare of MP3, WMA, and AAC music files, as well as Sony’s (in)famous ATRAC propriety format. The electroluminescent display is here as well, providing for a 1.5-inch “screen” that flows right into the rest of the device. In this way, it looks like “the text is floating on its surface.” Battery life is quite good at 20 hours from the lithium-ion units.

Tipping the scales at about four ounces, the Sony NW-A1200 will start hitting up retailers near you around July 20th, with an asking price of $200.