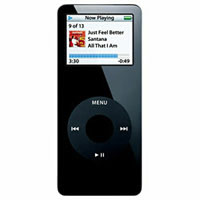 And here I was hoping that I’d be able to get my hands on an iPod Inviso by the end of the year. It turns out that Steve Jobs and crew over at Apple aren’t quite ready to unleash a new iPod model on the eager public just yet, with these new players being “delayed further than expected.”

This puts a temporary end on the discussion of a new iPod Video, at least for the time being. Don’t look for those mock-ups of a touchscreen wide aspect iPod Video to become a reality any time soon, nor should you be expecting a thinner, smaller iPod nano before the end of the summer. Let’s hope the “recent speculation by analysts” is wrong.

In related news, despite the public perception that Apple is sitting on top of the world with the iPod, MacBook, and other sleekly designed products, the company’s stock fell to an eight-month low of $55.76 earlier today. That is a far cry from the north of $100 level that industry pundits were predicting.