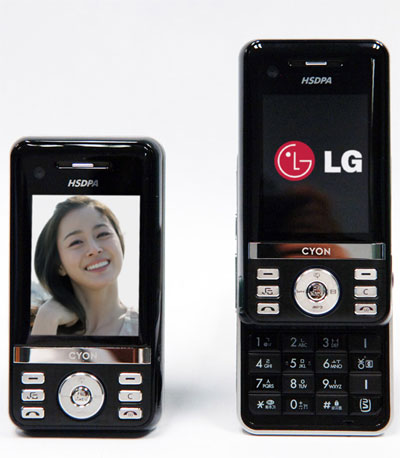 When HSDPA service really takes off, LG really wants to be at the cutting edge of handsets, and they have staked their claim to the position with two new phones. The Cyon video phones, called the LG-SH100 and LG-KH1000, will be available through SK Telecom and KFT. The phones take advantage of the high download speeds of HSDPA to effectively offer video chat. Wide LCD screens are big enough to display both you and the person you are talking to, while still making it possible to see each other without squinting. A slider keypad hides when you don’t need it and keys beside the screen make controlling the video chats easy. The phones also feature the expected toys such as an MP3 player, wireless internet and games.

The phones will not be cheap – they’ll cost more than $800. The HSDPA network has only been available in Korea since the end of last month and adoption has been slow so far. A contributing factor has to be that there has so far only been one HSDPA phone available, so these phones will likely attract more subscribers.