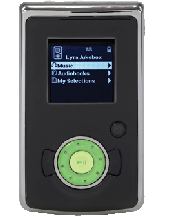 With solid state flash memory getting so cheap these days, it makes you wonder why anyone would try to make a hard drive based digital audio player these days unless they plan on throwing down some monster storage (30GB or more). But hey, by taking that route, you can keep the price down and give people multiple gigabytes of space at a budget-friendly price. Perhaps that’s the motivation behind the new 4GB H100 and 6GB H116 digital audio players coming out of the RCA camp.

I was quite impressed with the performance from the Archos 104 that I reviewed earlier this month, and by the sounds of things, these RCA players are about in the same league. There’s no OLED color display found here, however, with RCA opting for black-and-white 1.5-inch screens instead. The little bit of chrome gives the units some personality, and the support for PlaysForSure, WMP11, and Media Transfer Protocol will elicit a few smiles. Reported battery life is 16 hours. The basic H100 has a green non-touch-sensitive navi wheel, whereas the H116 has a black one.

The RCA H100 digital audio player retails for a very reasonable $139, whereas the H116 – which comes bundled with combination car charger / FM transmitter – ships for $169.