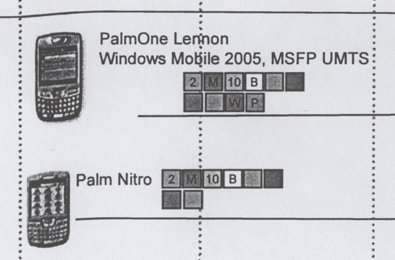 Two new Treos are expected to hit the streets through Cingular by October. The codenames for the two new products will reportedly be the Treo Nitro and the Treo Lennon. At first glance, they look a lot like most Treos; a candy bar design with a screen and a keyboard. There is one nice treat, though . These are the first Treos that don’t need an external antenna, so they are a bit sleeker and easier to stick in a pocket.

According to the rumors, the Lennon will run Windows Mobile 5.0. It appears to have built-in WiFi, which is a bit surprising, and supports EDGE and UMTS, which isn’t as surprising. Not much else is known, other than it will have a 1.3 megapixel camera. The Nitro will also have the same camera, but appears to run on the Palm OS, though likely an updated version.

It’s all just rumors at this point, but it’s certainly intriguing.