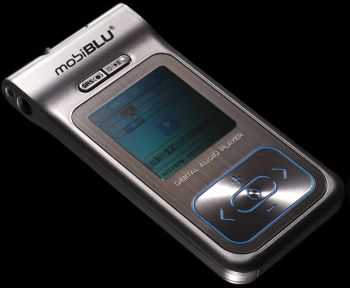 Ever since the release of the Motorola RAZR so long ago, the mantra of “slim is in” has been steadily increasing in volume across the marketplace, and its influence has stretched beyond the realm of mobile phones. We already see several skinny music players like the iPod nano flooding our streets and now mobiBLU is gearing up to go skinny on us with their new US2 MP3 player.

The US2 (which stands for “UltraSlim-2”; I must have missed the first one) is less than a centimetre thick. If it weren’t for the unsightly bulge at the top, this mobiBLU player would be just as skinny as the nano. The simple polished aluminium casing is soft spoken in its elegance, but the navigation keys at the bottom are clearly RAZR-influenced.

The 1.5-inch OLED color display appears to be a decent size, and the SRS WoW audio processing should keep the sound quality up among the best of them. It appears to one up the nano in that it will also to do video, photos and recording in addition to audio, though they don’t mention any specifics regarding formats and codecs.

Look for the MobiBLU US2 to start shipping the middle of next month in 1GB, 2GB, and 4GB varieties.