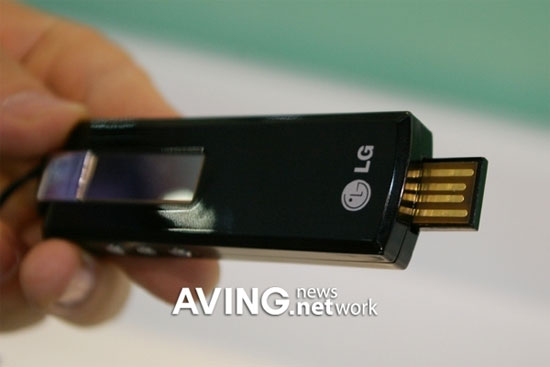 Seeing a USB thumb drive double as a portable MP3 player isn’t exactly anything new, but throwing in a pretty OLED display into the mix makes for a little more interesting product (just a little, not much). Over at SEK 2006, LG was showing off its latest stick of a USB flash drive, the “UP3 Sharp”, which is being marketed more as a digital music player than anything else.

As expected, the UP3 Sharp from LG is capable of playing back the usual suspsects of audio formats — MP3 and WMA — but they have also showing love for the popular Ogg Vorbis and ASF formats, not to mention X sync and Janus DRM support. I wouldn’t expect much out of the built-in voice recorder, but it’s there as well. Other key features include an 8-hour lithium-polymer battery, an equalizer with six presets, and a likely Korea-only release.

Look for the LG UP3 Sharp with OLED display (and a shiny, black, fingerprint-prone surface) to start hitting up kiosks in Seoul next month at a price yet to be determined.