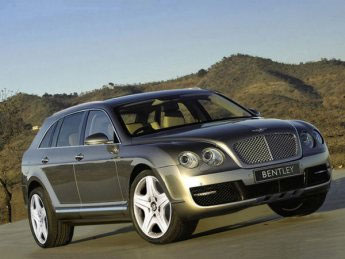 I don’t know about you, but when I think Bentley, I don’t think SUV. Regardless, Bentley is reportedly still developing an SUV to unleash on the market. The vehicles will be based on the Porsche Cayenne platform. Parent company Volkswagen also uses the Cayenne base for the Touareg SUV. Test vehicles have recently been spotted at a Volkswagen testing facility in Germany. It’s a bit of a surprise that it is surfacing now. Rumors of the Bentley SUV emerged in the middle of last year, but by January of this year we were hearing that the plans had been scrapped.

One possible explanation for the return of this vehicle to the drawing board is hat VW has scrapped plans for an SUV from Lamborghini, another of their subsidiaries. The Bentley SUV may not make a whole lot of sense, but it makes a whole lot more sense in terms of the continuation of a brand than a Lamborghini one does. If VW is desperate for a high end SUV, this may be the best fit.