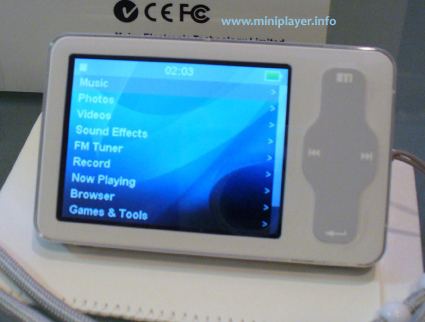 Remember the Meizu Mini Player we reported on a couple of months ago and how it was “iPod-esque in styling”? Remember how just about anything we hear about getting released in Korea or Japan never makes it to this side of the Pacific? Want to know how those two questions are related?

Well, it turns out that Meizu M6 Mini Player is actually coming stateside, and it just might have Stevie Jobs and crew shaking in their pants because it packs the same attractive styling as a certain media player, but throws in some extra functionality to get a leg up. Okay, so Meizu might not be able to dominate the market the same way that Apple does, but if this player lives up to its spec sheet, the company will certainly make some big strides in making a name for itself here in North America.

In addition to the usual MP3, WMA, WAV and Ogg Vorbis, the Meizu M6 can also handle AVI video files at a not-fantastic-but-acceptable 18fps. Other key features include a 2.4-inch QVGA display, FM tuner, voice recorder, calendar, stopwatch, USB On The Go, and even a couple games to keep you entertained between music sessions.