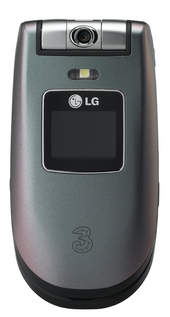 It seems like the philosophy with the latest handset coming out of LG Mobile is to pack as many 3’s as you can in there. For starters, the U300 is a 3G unit, and it will be offered exclusively through 3 in the UK. The camera is 1.3 megapixel shooter that can rotate for the best angle. Perhaps it’s for the best that the march of 3’s stops when it comes to the size of the display. It’s only two inches of colourful goodness.

Other key features include a built-in music player, an included 128MB microSD card to go with the expansion slot, Bluetooth wireless technology (with A2DP support), and, of course, 3G connectivity for high-speed data (presumably UMTS).

Potential buyers will get to choose between black, chameleon (looks hot, btw), and orange flavours of the LG U300 when they decide to jump on the 3G bandwagon with 3. No pricing has been announced, but they are saying that the LG U300 is designed to be “entry level”.