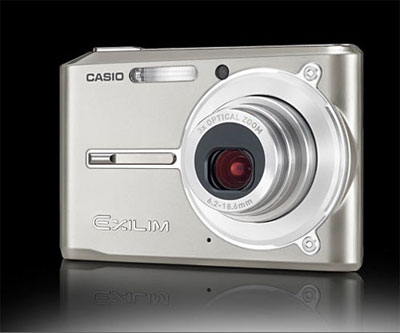 If you think that this new camera from the crew at Casio looks familiar — even its model number — then you’re not alone, because the Casio Exilim EX-S600D is simply an upgraded version of the already released EX-S600. That’s not necessarily a bad thing, because this is quite the tight package. The features remain much the same as its predecessor, but the EX-S600D adds the possibility of recording movies using the snazzy DivX codec which is all the rage with video compression aficionados.

You’ll still get a 6 megapixel imaging sensor, Anti Shake DSP to avoid those nasty blurred-out pics thanks to your arthritic hands, and an extended battery life (for about 300 still pictures) to keep you going without fumbling for replacements. Thanks to the new DivX functionality, you’ll be able to stash up to a full hour of video on a single 1GB card. Not too shabby. The “Past Movie” function is here as well, allowing you to “start recording 5 seconds before you press the record button.”

No word on pricing, but it seems like a Europe-only release, at least for the time being.