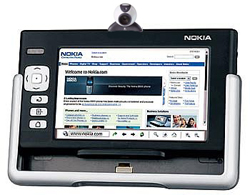 It’s not a cell phone, nor would you want it to be. The Nokia 770 is designed to be an internet tablet first and foremost, allowing for a more mobile web browsing, instant messaging, and email sending experience, but there are several shortcomings on the current generation that have left a good number of potential buyers away from dropping their hard-earned cash on the device.

Well, according to Ari Virtanen, the vice-president of convergence over at Nokia, the Finnish phonemaker is working on several upgrades for the successor to the current 770 internet tablet, including the possibility of including an integrated webcam and the ability to connect via WiMax. These are far from being confirmed details of course, and we have yet to see if how far they’ll be adjusting the form factor, if at all. Today’s on-screen keyboard has been met with mixed reviews, leading the possibility of a QWERTY thumb board as well.

We’re pretty confident that they’ll be eschewing cellular radios for the next 770, however, because Nokia wants to keep some of its products out of the “cellular value chain.”