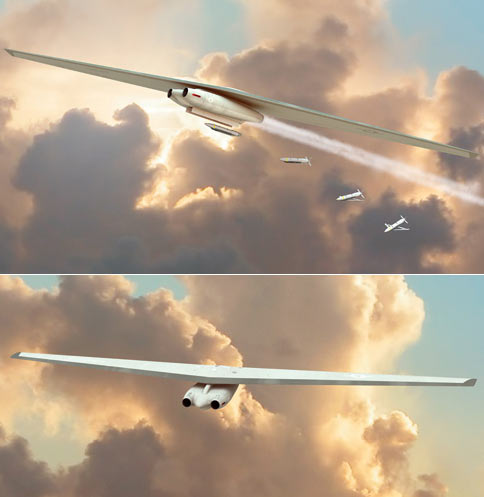 When it comes to designing aircraft, there is a big tradeoff. If you want to be able to hover above a site like a helicopter, you need to design a plane that can stay afloat, if you will, at low speeds. Conversely, if you want to rocket between New York and Los Angeles in the blink of an eye, the plane needs to be designed for high speeds and as a result, can’t exactly stay in the air very well at a turtle’s pace.

Northrop Grumman seems to be developing an unmanned aircraft that can accomplish both, thanks to its ability to rotate its wings up to sixty degrees. This allows the Switchblade, as it’s been dubbed, to slowly float over a given site, but in an instant can blast up to supersonic speeds and zip out of the scene unnoticed. With the wings outstretched, it floats with ease. With the wings folding in a bit, drag is reduced, and supersonic speeds are achieved, all the while maintaining optimal fuel economy.

Think it sounds a little like some of those strange UFO sightings you hear about, and then people laugh it off saying that it’s US Military testing? Maybe this is the plane they were all talking about, but we won’t be seeing it “in action” until 2020.