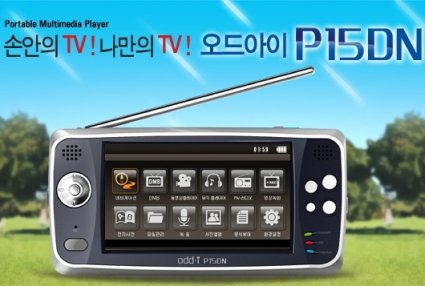 Don’t let the company’s name fool you, because no matter how much they try to convince you otherwise, the new personal media player from Odd-i (Odd-eye? Odd-ee?) isn’t all that different from the rest of the PMPs on the Korean market that will never see the light of day this side of the Pacific. Sure, the P15DN packs in a DMB receiver to catch a few shows here and there, but what product coming out of Seoul doesn’t do that these days.

While the Odd-i P15DN personal media player doesn’t do anything particularly special, it does do a lot of things that wouldn’t otherwise catch your attention if they were isolated. In addition to DMB, the P15DN will also tell you where to go thanks to the integrated GPS receiver, and play back your entire library of video, audio, and photos. What is a little different about this unit, however, is that it also “supports” MS Word, Excel, PowerPoint, and PDF files, presumably in a view-only kind of way, as well as a built-in Audio Dictionary.

Expect 20GB and 30GB varieties to be hitting up the streets of Seoul at some point, at price yet to be disclosed.