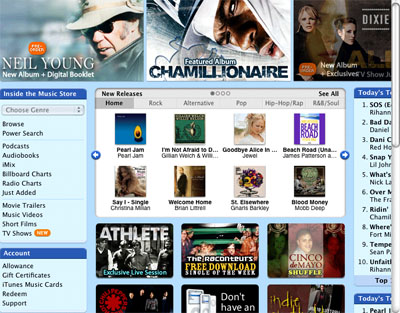 The ongoing dispute over the iTunes music store took an Apple-friendly twist on Thursday, as lawmakers in France got softer with their words in what had been a harsh copyright law directed at taking a large bite out of the Apple’s online music dominance.

It’s not set in stone yet. Heck, it’s not even voted on yet. But the draft law as it stands now allows music copyright holders to set restrictions on where their songs can appear. An artist could, for example, still team up with Apple, just like they can now.

The scuttlebutt has all been over the proprietary copy-protection systems implemented by Apple specifically but others more generally. If you buy a song on iTunes, it’s meant to be used on an iPod; and Apple goes to great lengths to make sure that if you choose them as your online music provider, you will use iTunes to download the music and listen to that music on an iPod. (The bills refer to online video downloads as well.)

Apple has refused to share its copy-protection codes, and France has sought to make Apple share. Apple provided the ultimate smackdown scenario when it raised the possibility of closing the French iTunes store altogether.

The bill is something of a compromise that definitely favors Apple, Microsoft, Sony, and other online music providers. The bill still has to be approved by both houses of the government, and it has a sort of “out” clause that allows for copyright-holders to sue in extreme cases. But as it stands now, it’s a major victory for Apple.