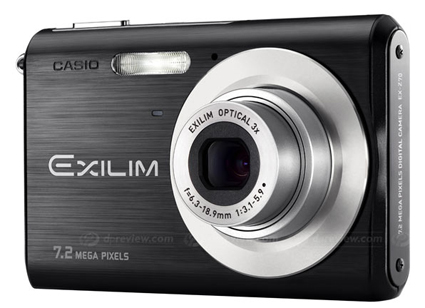 The EX-Z60 was just announced not that long ago, but the crew over at Casio already have its successor waiting in line to enter the marketplace. They’ve taken the familiar package, put it on the Atkins diet to lose a few millimetres from the waist, and added an extra megapixel (or so), resulting in a camera with a 7.2 megapixel imaging sensor that weighs in at a relatively light 118 grams.

The sleekly designed EX-Z70 comes with much the same set of features as the Z60 before it, including a middle of the road 2.5-inch LCD display, a standard-issue 3x optical zoom, and a “doesn’t everyone have this already” digital image stabilization. While the brushed black flavour will start shipping early next month, you’ll have to wait an extra four weeks to get a silver version.