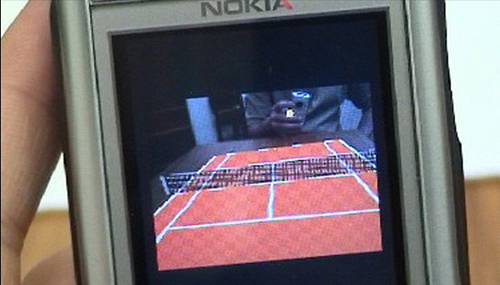 Now you can use your cell phone to play video games.

A report out of New Zealand says that a group of researchers have successfully used mobile phones to simulate the actions of players in video games. In the test, two players played a game of AR (Augmented Reality) Tennis using their phones as racquets. The phone LCD is the video display, and Bluetooth shoots the ball from one phone to the other. One player serves by hitting a key on the phone, and then both players swing their virtual racquets by moving their phones. Contact is assured when the phone beeps.

This is a far cry from the headgear-heavy variety of virtual reality games that we are used to hearing about. And it certainly resembles the motion-based functionality of the yet-to-be-released Nintendo Wii.

Mobile phones are ideal for one-person or two-person games that require minimal kinds of movements or repetitive movements. The demonstration of AR Tennis took place in the Human Interface Technology Laboratory using a pair of Nokia Series 60 phones. The technology will be demonstrated at Siggraph 2006, an international CGI conference in Boston.