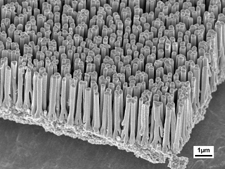 Not long ago, we told you about American scientists using nanotechnology-based capacitors to power battery chargers. Now comes word out of France that nanotech is afoot in that country’s battery creation efforts.

A group of researchers from two universities in France say that they have used nanotech methods to create lithium-ion battery electrodes that are more powerful yet much smaller than conventional electrodes.

The key breakthrough came with the use of nanorods as anchors for the application of active material, which is the transference device by which a battery gets its power. That active material is wrapped around the nanorods in a thin film that allows ions and electrons to move very quickly and provide the power needed to run the various devices that run on batteries.

Conventional batteries need to be thicker and larger in order to produce more power. This is not the case with the nanotech batteries, which are thin, sleek, and powerful. For every square centimeter of electrode, the nanorods provide 50 square centimeters of surface area.

The thinness of the film and the small size of the nanorods also facilitates a new active material that can accommodate even faster chemical reactions and produce even more power. In addition, the batteries have been shown in laboratory tests to have a longer life in between charging as well.

What does it all mean? This exciting new technology has yet another use: to make batteries that are smaller yet stronger, more powerful yet more high-tech.