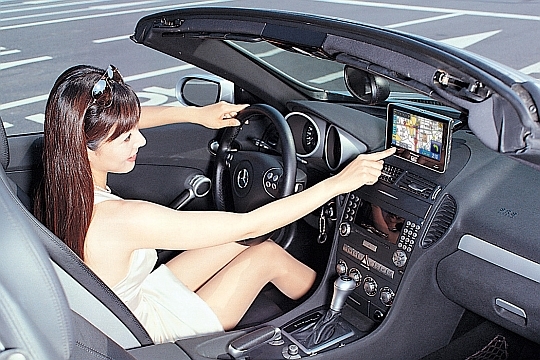 Much like the Centrix device revealed earlier today, Inkel is doing much the same their latest offering, except they’re adding an extra three-letter acronym into the mix and offering a larger screen. The price will likely reflect these additions, but there’s no Bill Gates-powered operating system on this device.

The Inkel W-7.0, as its name implies, features a 7-inch widescreen display. It seems the intention behind the W-7.0 is for it to be used in a car as a GPS navigation system, but they’ve thrown in some rather nifty entertainment options as well. No word exactly on which codecs and formats this multimedia device will support, they are marketing the Inkel W-7.0 as a PMP, so we should be expecting the usual suspects like MP4, DivX, AVI and the like.

If you get tired of looking at the maps, or watching movies from your own collection, you can also switch over to the integrated DMB tuner – if you’re in Korea, that is – and catch the latest shows that way. But don’t forget to keep your eyes on the road, kids.