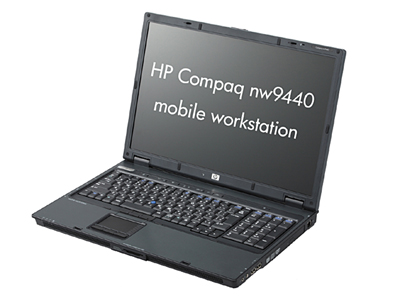 Don’t call it a notebook or a laptop, because it’s not. Don’t let its outward appearance fool you, because the nw9440 from HP-Compaq of Japan is so beefy that it’s being called a “mobile workstation.” Marketing speak aside, this 17-inch WSXGA+ TFT LCD screen’d computer rocks an Intel Core Duo T2300E (1.66GHz) processor, the Intel 945M Express chipset, a full gig of DDR2-SDRAM (with options for up to 4GB), and a speedy 7200rpm 80GB SATA hard drive. Still not impressed? Well, it runs on XP Pro too. Pretty impressive, huh?

Other key features include a 256MB NVIDIA Quadro FX 1500M card for graphics, a one touch button for “easy access to presentation mode”, a stereo microphone input, 7-in-1 card reader, and a “super multiple DVD drive.” Connectivity options come by way of integrated Gigabit Ethernet, two flavours of WiFi (b/g) with WLAN security (so many acronyms here, that I’m not going to even bother listing them), and the usual RJ11 and RJ45 ports.