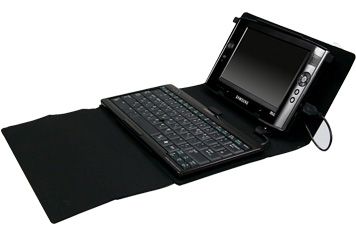 UMPCs haven’t quite been received with the best of receptions, much to the cries of pain from investors ’round the globe. Aside from their other shortcomings — like minimal storage capacity, slow processors, and a heavy price – people were complaining about the awkward text input interface on UMPCs (no fans of the dial keys, I suppose).

Samsung listened and is now shipping their Q1 UMPC with a “free” USB keyboard. To sweeten the deal, they’re also including a complimentary carrying case. But doesn’t this just beg the question? The whole point of a UMPC in the first place was to bridge the gap between handheld PDAs and full-function tablet PCs. By adding in a keyboard, the Q1 has become a tiny laptop, no?

I guess this is a quick fix for now, until they get the next generation UMPC ready for us.