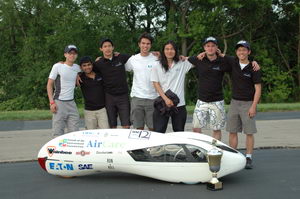 The engineering students at the University of British Columbia – coincidentally my alma mater – have achieved yet another incredible feat. The crew may be better known for hanging Volkswagen Beetles off of the most obscure of locations including the Golden Gate Bridge and off the sides of buildings, but they actually do some useful research and innovation as well.

At the Supermileage, college (and high school) students from across North America compete to create the most fuel efficient vehicle and for the fourth time in six years, the students of UBC took home the prize. Their most recent entry seems to be running on fumes, because it’s capable of going 3,145 miles on the gallon (or 0.074 litres per 100 kilometres for the Canadians in the audience).

Aesthetics weren’t too much of a concern for the UBC students, hence the “vehicle” having such a strange look to it, but they had to keep aerodynamics in mind. Other key elements to creating the ultimate fuel efficient people mover including lightweight construction, a small displacement (54cc) engine, and “conservative driving habits.”

Second place in this year’s contest went to the team from the University of Laval, whose entry could only do 1,823 mpg.