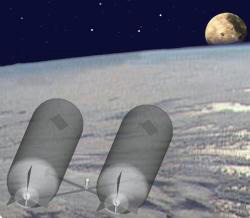 It’s not just a lot of hot air.

A handful of companies, including space-industry leader Lockheed Martin, are working on solar-powered blimps that can serve a host of purposes, including transmitting cell phone calls, taking deep-space snapshots, and detecting incoming missiles. The Hubble-like aspect is garnering the most press these days, especially since the venerable space telescope is targeted for eventual disintegration; but the other uses are powerful possibilities as well.

The target height for blimp surveillance is 20 kilometers, which is above most of the earth’s atmosphere. Pictures taken from that height could provide unique views of the heavens—or perhaps unique views of Earth. We wonder whether governments wouldn’t get involved at some point, using the blimps for “observation.”

Research into such blimps has been ongoing for more than a decade, but costs and technology have been prohibitive until now. One expert has estimated that a blimp would cost US$10 million, compared to US$1.5 billion for a Hubble-like telescope. The Hubble, though, can provide longer and deeper views because of its ability to hold larger and wider mirrors. Where blimps succeed is in taking more and larger photos of outer space, substituting speed for distance, achieving better photos than terrestrial telescopes but falling a bit short of space-based cameras.

Speaking of the government, the federally funded National Aeronautics and Space Administration is working on its blimp, the Ultra Long Duration Balloon, which would have a telescope attached by a cable. One would hope that a NASA-made product would take pictures of only the heavens.

Other manufacturers are pursuing their own solutions. The winner of such a race might have their product aloft in the next few years.