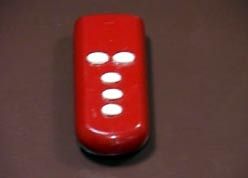 The National Institute of Design in India has taken the simplification of mobile phones to the extreme. Their Mini Mobile is like the Firefly, but cruder and simpler. It has just three buttons that you use to make calls to preset numbers and it has no display. It is targeted at the elderly and children who don’t need, or cannot use, phones packed with fancy features. It is also targeted at school children since an MMS scandal has created a ban in the country on phones which can be used for messaging .

In some ways the Mini Mobile can hardly be called a phone. It has no SIM card of its own, so it has to be networked to another mobile phone to work. The phone also helps address a serious phone theft problem in India in that the phone is largely useless if stolen and can be blocked from being used simply. That should stop thieves from even going through the effort of stealing them.