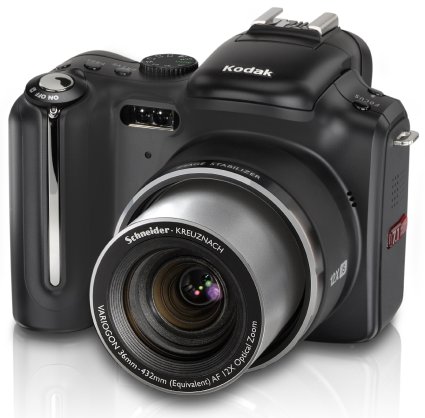 No offence to the good people at Kodak, but I’ve always thought of their EasyShare line of digital cameras as very uncomplicated point-and-shoot type of units designed with technophobes in mind.

I guess they want to dispel that “far too basic” image, because Kodak is releasing the P712, a formidable 7.1 megapixel picture taker that sports a rather impressive 12x optical zoom (that’s a heck of a lot better than the 3x we’re used to seeing in consumer-level cameras). Other key features to this semi-prosumer camera include optical image stabilization, “speedy” auto focus, and a vibrant 2.5-inch LCD for all your previewing, reviewing, and setup-ing needs.

With support for RAW files and the ability to capture VGA video at 30fps, Kodak just might capture a few savvy shutterbugs out there with the new P712, especially considering that it’s a relative bargain at just under $500.