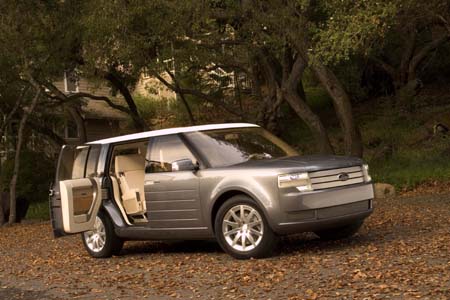 Minivan sales have been steadily dwindling the past few years, and the stigma of driving a gas-guzzling sport utility vehicle is becoming more prevalent than ever. What do you do when you want a versatile interior cabin that can stash both cargo and passengers, but don’t want to look like a soccer mom doing it? Ford appears to have an answer in the un-minivan Ford Fairlane concept, which should be hitting up the car show circuit next year in an almost-ready-for-production form.

While the exterior might make the Fairlane look like little more than an oversized Mini Cooper, you’ll notice several differences that set this larger people (and cargo) mover apart from the competition. The conventional rear sliding door(s) found on minivans has been replaced by suicide doors, allowing a large entryway into the interior cabin. Coupled with the lower ride height compared to SUVs, and even dear ol’ grandma should be able to hop into the back without a problem. I’m not a fan of the reported two-piece, three-way liftgate in the rear, however.

Of course, many of these “details” are likely to change before the Fairlane actually hits dealerships, but it seems like the people at “FoMoCo” (not to be confused with DoCoMo) are taking a couple of risks and trying to be a little different.