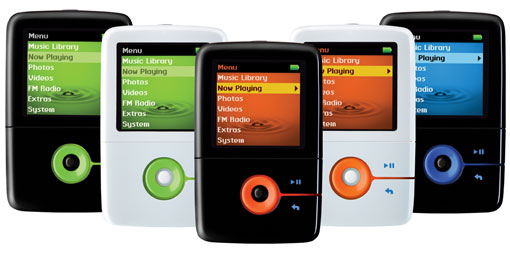 Creative, as per usual, has taken a calm, sleek approach with the new Zen V. Available in black and white exteriors, with your choice of green, blue, or orange accents (depending on the capacity you selected), the lightweight (43.5 grams) Zen V is quite compact at 2.6 x 1.5 x 0.5 inches. The 1.5-inch OLED display is a beaut, as well.

Standard features include a reported 15 hours of battery life per charge, voice recorder, line-in encoder, album art support, and PIM functions. The FM radio touting Zen V Plus will tackle a good variety of both audio (MP3, WAV, WMA) and video (MPEG-4, WMV, DivX, etc.) formats, but the base level Zen V will only do audio. It appears both are capable of doing JPEG photo viewing, however.

Unfortunately, when it comes to uploading your favourite tracks, you won’t be able to use the Zen V as a mass storage device (for music, anyways), instead having to resort to the Windows Media Player for those duties. Prices range from $120 (1GB) to $200 (4GB) for the Zen V, whereas the FM-playing Zen V Plus will go for between $130 and $230 for the same capacities. Look for the Zen V and Zen V Plus from Creative to drop either in July or August.