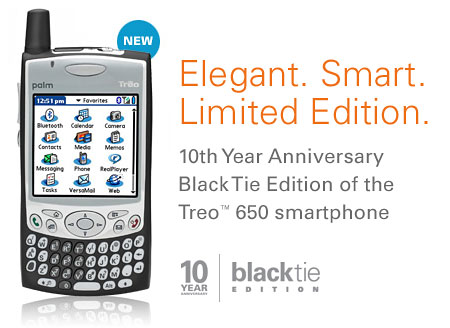 This is nothing new. A manufacturer realizes that a certain item in their product line is about to go obsolete, with sales dwindling and interest going along with it. That’s why you try to spruce up something old and pawn it off as something new. Motorola’s done it with their Technicolor RAZRs, so why can’t PDA phonemakers do the same? Well, it turns out that the Black Tie Edition Palm Treo 650 we heard about some time back is absolutely for real and it’s absolutely selling for a paycheck-eliminating $599 before any kind of discount.

If you’re hoping that this “update” comes along with some sort of upgraded feature set, you’re going to be sorely disappointed. Instead, they took a standard issue Treo 650, wrapped it up in black (hence, “Black Tie Edition”, great for the Governor’s Ball, I suppose), added a unique hard case, and tossed in a dual-purpose stylus-pen.

Destined not only for Asia-Pacific, but North America as well, the “Black Tie Edition” Treo 650 is available now.