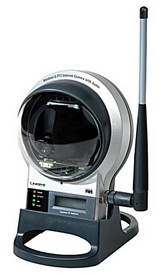 Not every PC camera can double as a security device. Linksys has one, and it’s of the wireless variety.

The WVC200, or more commonly called the Linksys Wireless-G Pan/Tilt/Zoom (PTZ) Internet Camera with Audio around the Linksys office, is standard in size, small, but packs a wallop of features, including the most newsworthy – the lack of wires. It has its own IP address, so you can hook it up to a wireless network. The software supports Dynamic DNS as well. Conceivably, the camera need be nowhere near your computer in order to deliver live video and audio.

The pan, tilt, and zoom functions allow for remote control, and you can save what it all records as MPEG4 files to your handy hard drive. This remote-control functionality can be taken to its logical extreme as well, by programming the camera to turn on and start recording when nearby motion is detected. An email alert to up to four addresses lets you know if your security camera begins recording. These email messages can even include a short video clip.