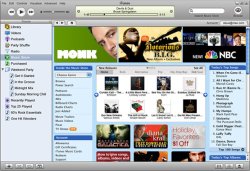 First, Stevie Jobs and crew lobbied for the ability to sell all their songs on the iTunes Music Store for a penny short of a dollar. Then, they moved on to being able to peddle whole music albums for $9.99 and TV episodes for a buck-ninety-nine. The next frontier for the 99-cent price point appears to be movies, because Jobs is fighting hard to sell movie downloads for $9.99.

According to Reuters, movie studio execs have been approached by Jobs to work out that deal, which would allow Apple to pay studios a 70% wholesale rate and in turn sell the DRM’d movies for ten bucks less a penny. However, that offer seems to has been “flatly rejected,” with a $9.99 to $19.99 range being more likely.

But who’s going to pay twenty bucks for a QVGA (or even VGA) download that can only be viewed on a computer monitor or squinted at with the next-gen iPod Video? Not me.