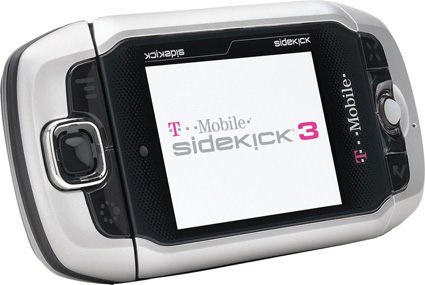 The interweb has been abuzz with the next generation T-Mobile Sidekick (known as the HipTop in the Great White North, available through Fido), with leaked pictures and guesstimated specs coming out months ago. All of that has built up to this day, because the Sidekick 3 (not Sidekick III) finally received an official launch party courtesy of T-Mobile and Danger.

The features and other deets are pretty much in line with what we know already. The display remains the same size as the SK2 at 240 x 160 pixels, and capable of displaying 65,000 colors. While the Sidekick 3 does sport Bluetooth 1.2, they’ve crippled its capabilities, limiting BT use to the handsfree profile and vCard exchange.

The camera has been bumped to a 1.3 megapixel picture taker, the trackball has been thrown in for easy navigation, and there’s a miniSD expansion slot for extra storage space in case the 64MB on board doesn’t suffice. Another nice addition is the “Mini Music Player”, though it can’t handle any DRM content. Too bad there’s no Wi-Fi (yet).

We haven’t heard any official word on pricing, though the current consensus is that they’ll start selling the Sidekick 3 to the general public starting July 10th, with existing Sidekick users getting first dibs a little while before that date.