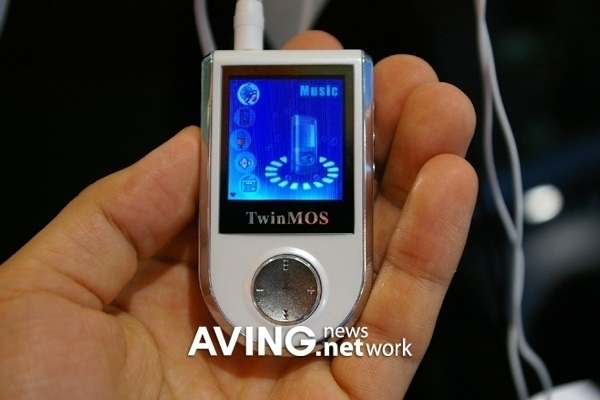 In typical AVING fashion, the editors barged into the Computex 2006 trade show in Taipei, Taiwan with high resolution cameras in tow. They go on a snapping spree and come back with a plethora of pictures, among them a pair of media players from a company known only as TwinMOS.

While the MMD628 is officially being billed as an MP3 player, the compact media player is also capable of playing back AMW videos. While it would have been nice to know about about this player, other than the fact that it sports a squinty 1.5-inch screen, anything else that I’d mention here would be nothing more than conjecture.

Much more is known about the PMP 525 from TwinMOs, though. The 2.5-inch LTPS display is capable of 16 million colors and will play back your MPEG 1/2/4 videos without a hitch. The handheld unit also handles music, including the lusted after Ogg Vorbis format. Other features include a JPEG picture viewer, a built-in mic and line-in jack, Compact Flash expansion slot, optional FM radio, and capacities ranging from 128MB to 4GB.