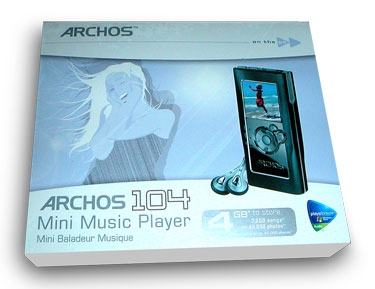 Archos doesn’t have the same level of market penetration as Apple (well, no one does these days), Creative, or Toshiba. In fact, their products are pretty hard to come by here in Vancouver, with only the odd outdated PMP popping up at the local Future Shop or Best Buy from time to time. Myself, I have never had the opportunity to fiddle with an Archos product, so I jumped at the opportunity to test out one of the company’s latest DAPs – the Archos 104 – and I must say that I am pleasantly surprised with the hard-drive based player.

First impressions go a long way, and Archos did not disappoint in that department. When I opened up the brown parcel, I unearthed a glossy white box with the standard vivid image on the front, and an overview of features on the back. Interestingly, the picture on the back of the box was actual size (I’ll get to the size of this player in a moment). Sliding the sleeve off, I got a fairly plain looking white box underneath; however, opening that white box revealed attractive black velvet-like lining with the glorious black and chrome music player mounted in the center. Underneath is your standard offering of included accessories, including a USB cable, lanyard, and earbuds.

Holding the 104 in my hand, I noticed that it has about the same footprint as an iPod Nano (3.6 x 1.7 inches), but is noticeably thicker and heavier at half-an-inch and 2.8-ounces, respectively. I wouldn’t go so far as to say that it is too heavy, but for those of you accustomed to the feather-light Nano, the 104 might take a little getting used to. The build quality is quite good and the materials chosen are great. The carbon-like black (think very fine sandpaper) makes me feel like this player is already in a scratch-protected case. The controls (all of which are placed underneath the very vibrant, fluid, 1.5-inch OLED display) are mapped onto darker chrome, almost gunmetal-like. They’ve kept menu navigation quite simple, with a five-way directional pad, a “Go” button and a “Stop” button. The “Go” button brings up the menu, turns the unit on, and that kind of thing, whereas the “Stop” is used to turn it off, cancel, exit, etc.

While there isn’t a paper-based user manual, they do include a fuller instruction “book” in PDF format, stored on the player’s 4GB hard drive. In an effort to address a wide range of customers, all documentation is available in a variety of European languages – English, French, Spanish, German, Dutch and Italian – but there are no Asian languages here.

The Archos 104 will take MP3, WMA, and WAV files, as well as PlaysForSure-protected files. It would have been nice to see some love for the elusive Ogg Vorbis, but that’s forgivable. While it won’t play back videos, there is a picture viewer that works with standard JPEG images. While some songs are playing, it will even display the album art, which is a nice touch. As far as file transfer is concerned, the Archos 104 will do it via speedy USB 2.0, either through Windows Media Player 10 (for CD ripping and the like) or simply as an external hard drive. However, you have to go into the player’s setup menu to switch between the two options. No AC adapter was included in the package (though one is available as an accessory), so you’ll have to use the USB cable for a battery boost. To transfer files, you’ll need to “OK” the USB connection on the player beforehand.

I liked the blue LEDs indicating power (ON), hard drive access (HDD), and charging (CHG). I also found that the sound quality was pretty darn good, even while using the included earbuds (which have an in-line volume control). The music playback was crisp, clean and clear, but the bass was a little lacking. However, when I swapped out the Archos earbuds for my Sony wraparounds, the “thump” that I was looking for emerged. So, you may want to do a headphone upgrade if you pick up the 104. 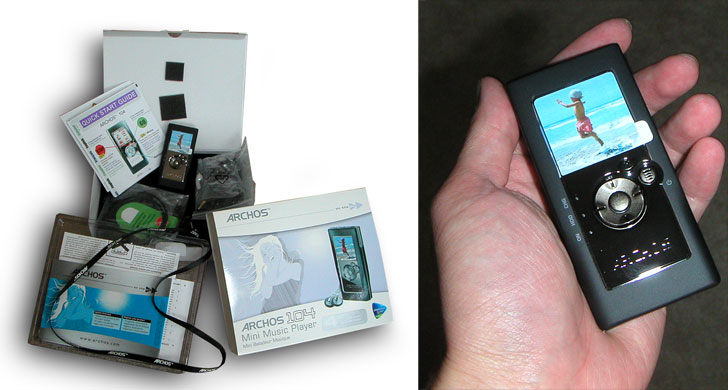 While it does keep the price down, by Archos opting for a hard disk drive instead of solid state flash memory, you will experience a little bit of lagging and loading time. When navigating through the menu and browser, it does take a split second for it to actually do something when you try to browse your playlist folders. Loading a song also takes about a half second or so. It’s not a terribly long amount of time, but it can get annoying to some people after their third café of the day.

The battery life was better than I was expecting, considering that the Archos 104 is hard drive based. I turned the backlight off, set the volume at 90 (out of 100), and let it shuffle through the tracks. What resulted was a solid 11 hours of play, which is more than adequate for most daily users, given that you have the opportunity to charge the unit each night (which takes about three hours).

Cons:
– loading times
– can get warm sometimes
– can’t turn off LED when in use
– keypad lock doesn’t lock volume control